Note: This guide uses Reality for DAZ Studio. Poser users may still benefit from this guide, however I have not used Reality in Poser so your mileage may vary. Next, I'm not going to cover all the settings in Reality and Lux but I will cover the ones you would need to know to get started successfully working with these tools.

What is a lux? (Without going into the whole measurement system, which as a hobbyist, you don't need to get into) it is a basic measurement for the illuniation provided by light. It comes from the Latin word "lux" which means "light".

What is a render? It's what you get when the computer adds up all the numbers that your 3D scene represents to it, and spits it out as a finished image. The word can also be used to represent the action of this process. Example: It will take one minute to render the picture.

What is LuxRender and Reality? LuxRender a program that lets you render your images based on physically known laws. It uses a whole lot of math behind the scenes to do this, but with the Reality plug-in for DAZ Studio, you don't need to bother with all the boring details. Reality translates all the information you give it into the language that LuxRender will understand. 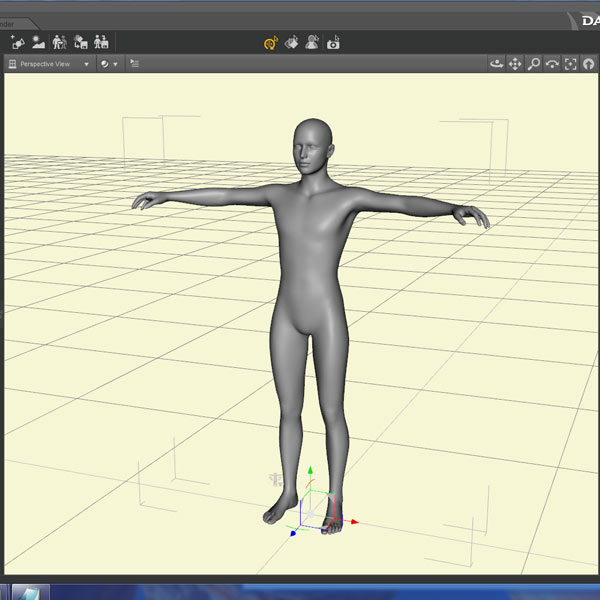 You will see the default scene with our gray Genesis figure. Let's delete it by clicking on it and hitting delete on your keyboard.

For some reason, at least on my system, a new scene loads without a camera. So if your scene does not have a camera, go to Create in the file menu and select New Camera. 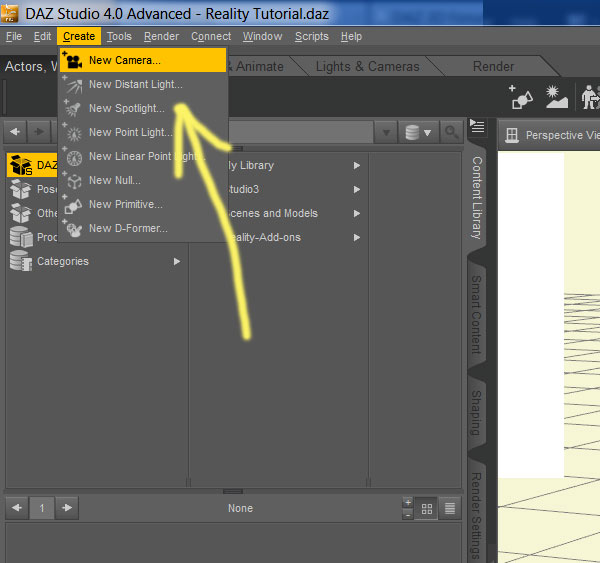 Then from the top-left of your "viewport" (the window where you actually see the objects of your scene) select the camera to look through it. 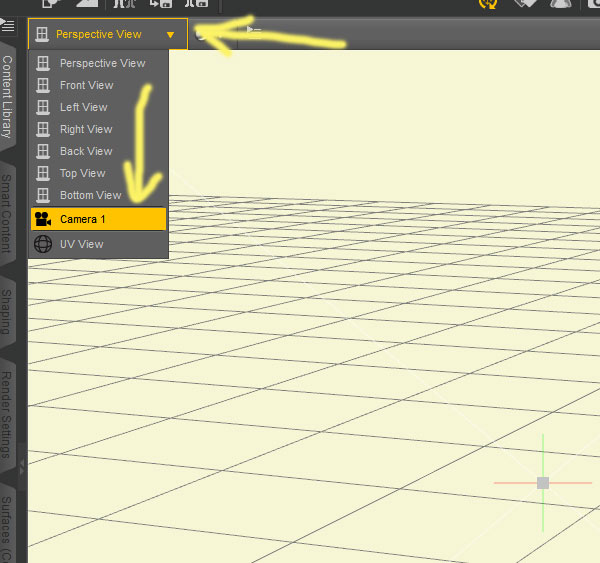 Go to Create in the file menu and select "New Primitive" and choose the cube. (Primitives are simply basic shapes, like the cube, sphere, etc, called "primitives" simply because they are simple.:P) 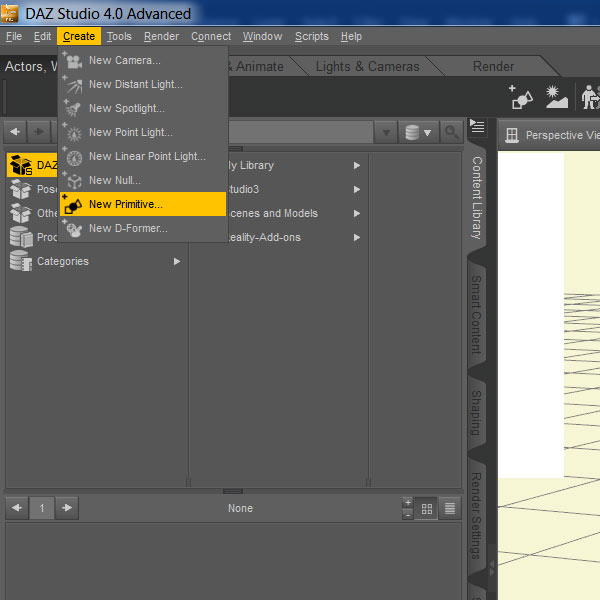 Resize the cube until your camera view is inside it. 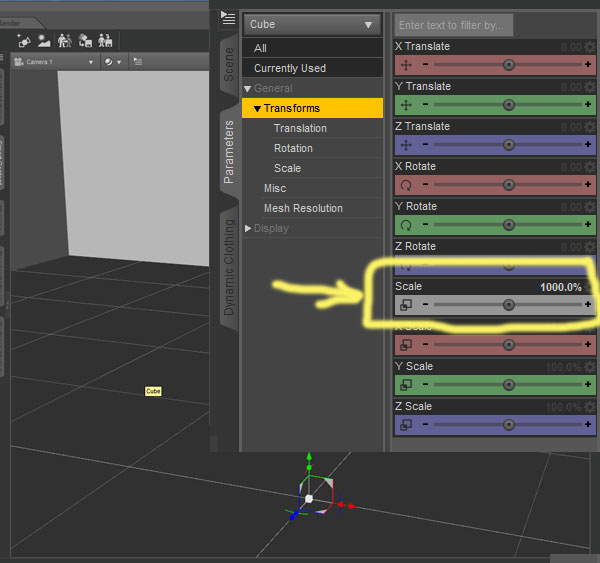 For the purposes of this tutorial I am using my couch freebie. Go to Poser Formats, My Library, Props, Couch and double click the couch to load it in your scene. 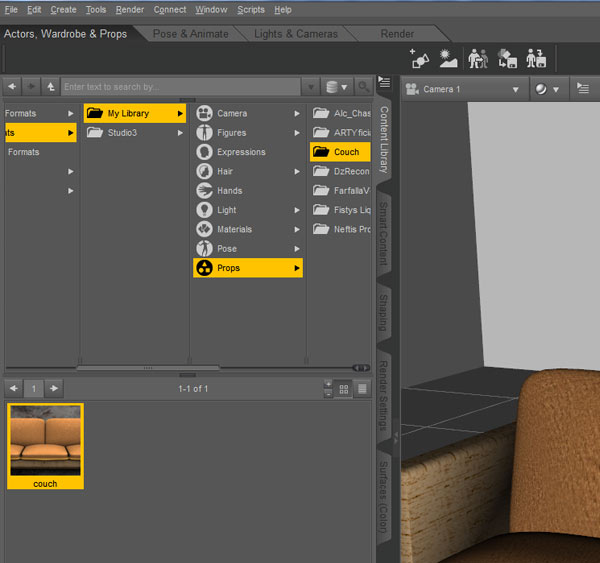 Now let's position our camera better. You can do this using the below buttons: 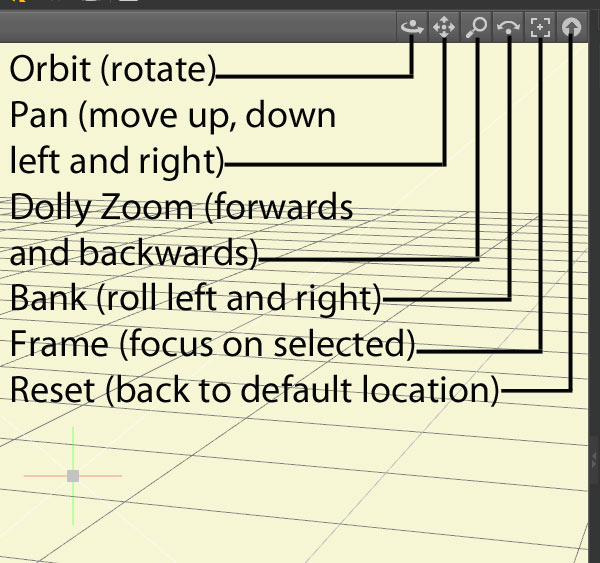 This looks much better: 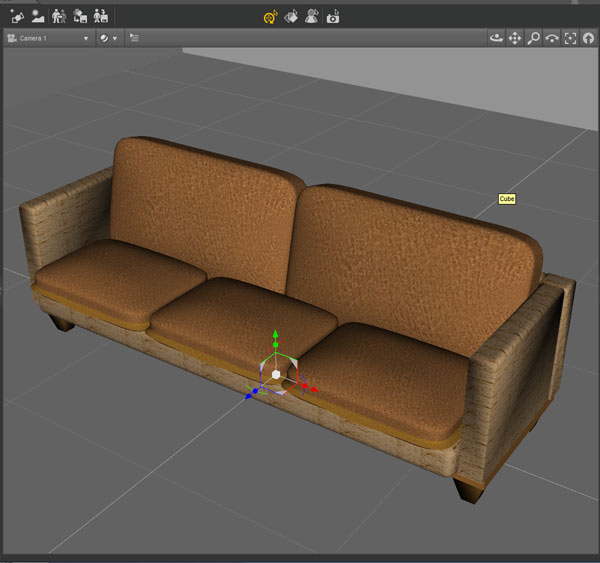 Click on your cube, then go to the Surfaces (Color) tab. From here click on Default, then Diffuse. In the little box below, open the texture file (image file used to represent a surface) of your choice. You can get the one I used in the tutorial here. 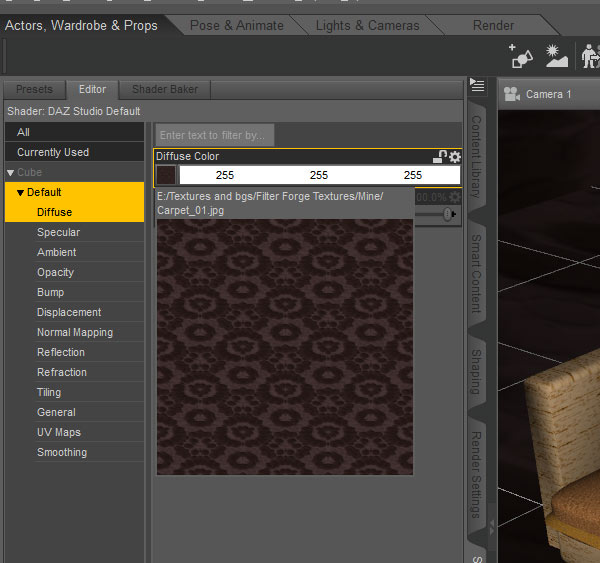 Then click on Tiling and raise the number of tiles (repetitions of the image) horizontally and vertically to whatever you like, but make sure to use whole numbers. Reality does not import the decimal, which could cause your image to look a little different than you expected.) 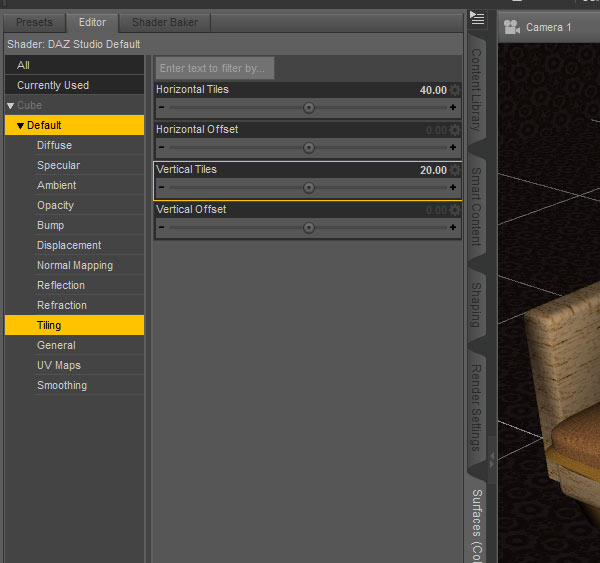 Add some lights. I like to use two "mesh" lights. A mesh is a 3D representation of an object, consisting of nothing but lines and points where lines meet called a "vertex" or "vertices" for more than one. 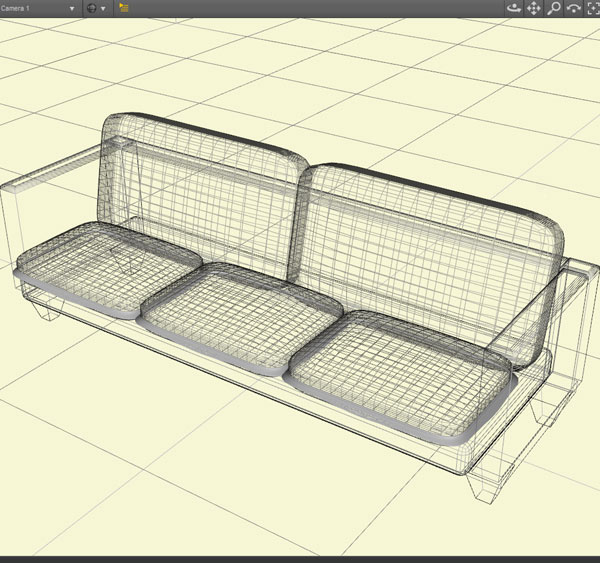 In LuxRender, it can make use of these meshes as sources of light. The simplest and easiest of these on your computer's resources is the plane. In the Reality Add-ons folder there is a plane already set up for you. 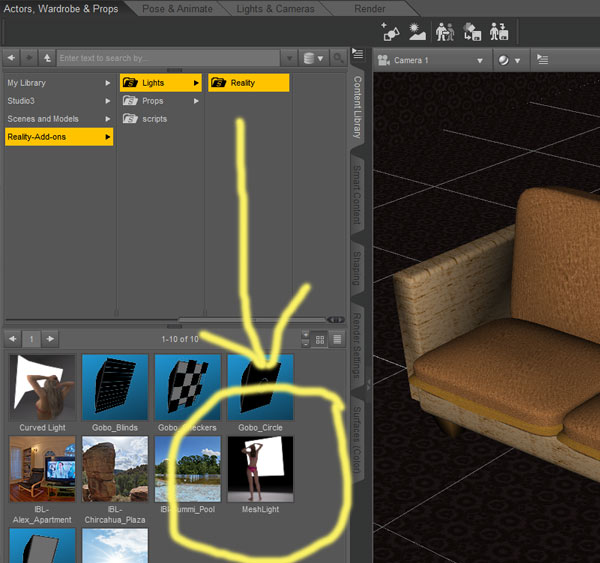 Go to your Content Librabry, Studio Formats, Reality-Add-ons, Lights and select Mesh Light. Double click this twice so we get two lights. Next, position your lights using the Perspective View (so not to mess up your camera's position) like below: 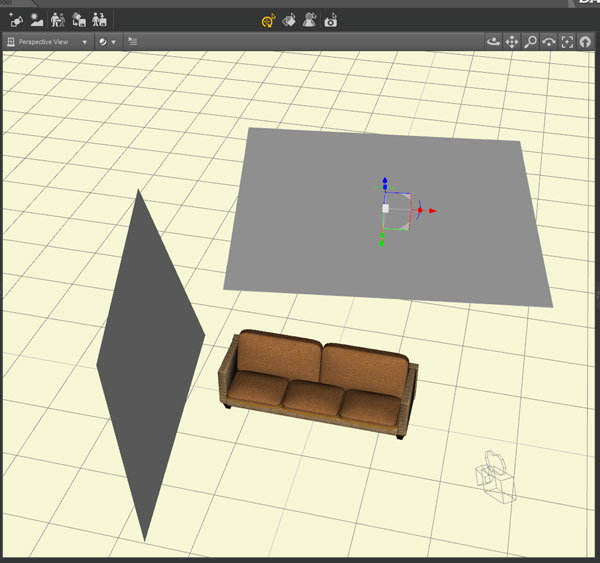 Make sure the green arrow is pointing at your object; that's where the light will come from.

You may have to temporarily hide your cube in order to do this easiy. Hide it by clicking the eye under the V column in your Scene tab. (If I had to guess, I would say V stands for "Visable" and S stands for "selectable", since that is what they control.) 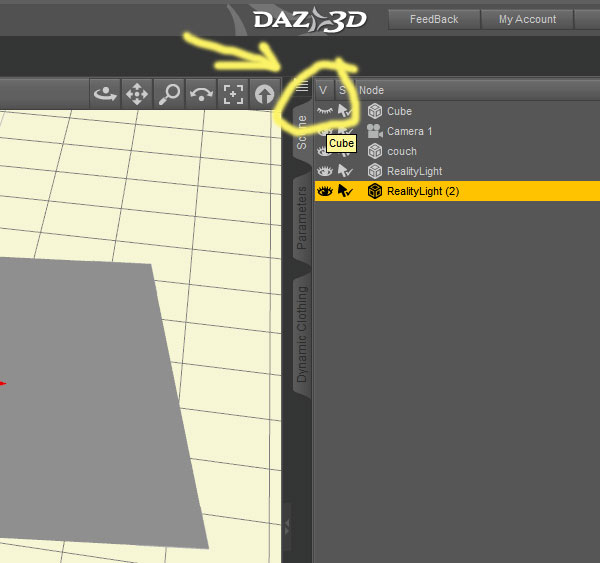 Scale your meshlights up nice and big like in the above images. This will cause the light to become softer.

Think of an afternoon with a bunch of clouds covering the Sun. This turns the sun into a giant mesh light with very soft shadows.

Render time. Make sure to make your cube visible again before calling Reality. Then go to Render in the file menu and select Reality Render. 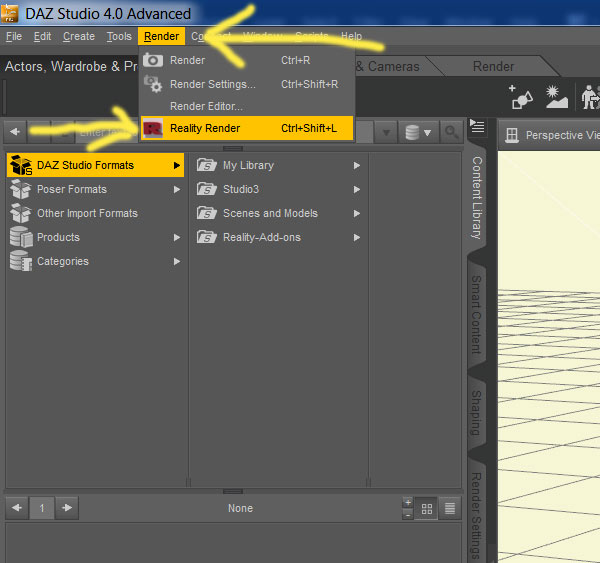 Under the main Material tab you have the following tabs: 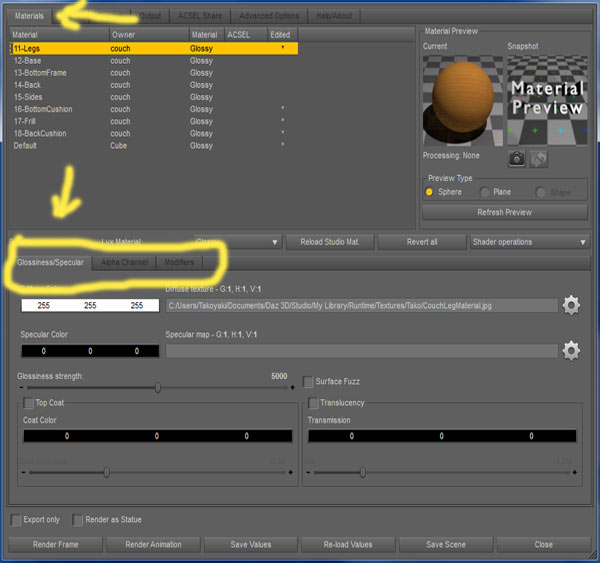 Diffuse: This is the overall color of your surface. Tip: If you are getting a lot of noise that won't clear up on your object(s) or you simply want to speed up the noise going away in your render, lower the diffuse color settings of your objects from 255 255 255 to something like 215 215 215.

Specular: These could be considered "blurred reflections" or "highlights".

Glossiness: The overall shininess of your surface.

You'll notice the letters G, H and V above the text boxes where the image files go. G stands for gain and is like an overall volume control, H is number of horizontal tiles and V is for verticle.  You can access the settings by clicking the gear icon as below and selection "More options": 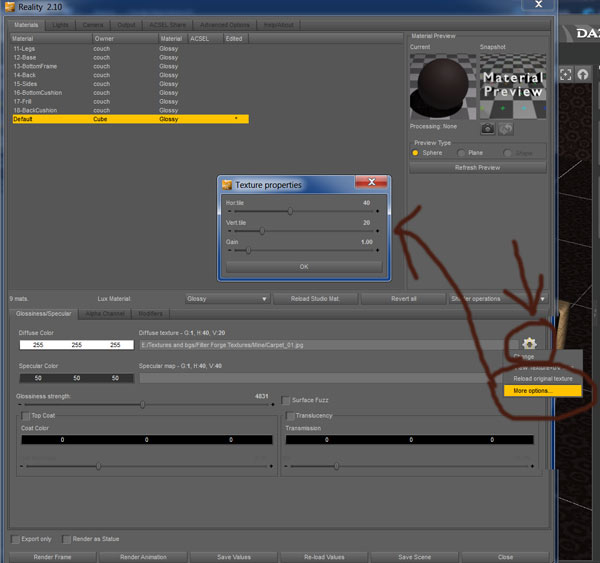 Setting the gain higher will increase every setting's effect in its section. Generally you want to leave gain alone. (For me, I only change the gain in the diffuse tab for things like making the whites of the eyes whiter sometimes. Moving it up to 1.15 or 1.2 has been enough in the past for such purposes. I have not experimented with the gain setting in the other channels much.)

The alpha channel is your transparency (see-through) channel. This is especially for things like hair or open lacework in clothes, things like that. We won't need it for our couch. 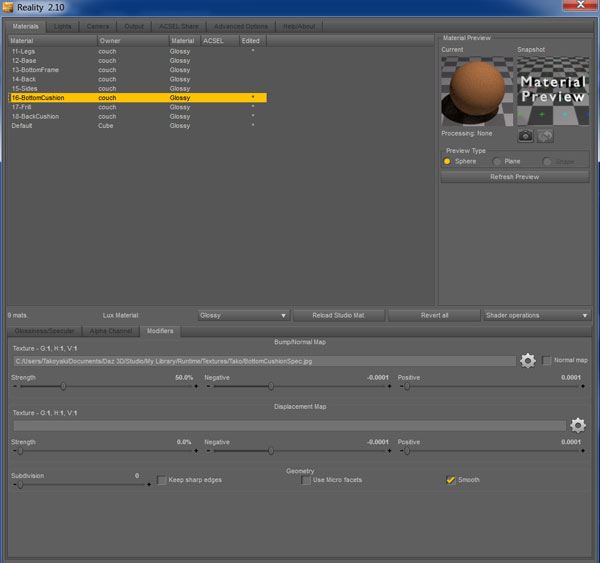 Bump: This setting controls how the light interacts with the surface. It does not actually create real bumpiness on the object, the shape does not change, it only appears to change because of the light.

Strength is for the overall intensity of this effect.

Displacement: This is actual change of the geometry. You can conisder the bump channel to be "faked displacement". Put your hand in a bucket of water and you will notice the water level rise slightly. That is displacement. The displacement maps applied to an object displace or move out of its normal location, the points and lines in your object. Due to this actual change, it can take up a lot of computer resources depending on how much displacement and on how many objects you are using it on, so use it carefully.

The settings unique to displacement here are:

Use Micro facets. A facet is a side of something. Think of it like a 20-sided die in a game. Each side is a facet. Now imagine having a die with 1000 sides. Those would be really small facets, hence the word "micro".

Keep Edges Sharp: This is just what it sounds like. This is good for thinks that you want to have a nice rough or inorganic appearence to them.

Smooth: New in Reality 2.0. This options allows you to change how the model is rendered: smooth or faceted (aka flat shading). Flat shading is good when you want to create something like the effect of a cut diamond where the faces of the model must remain flat and sharp.

So what are good settings to use?

Depending on your scene setup, this can very wildy. But for our setup, we have a closed environment with not a lot going on. Some basic settings would be as follows: For the cube itself, you can either set it to matte (which means it doesn't have highlights) and be done with it, or do a similar setting as the couch to add some brightness to it. 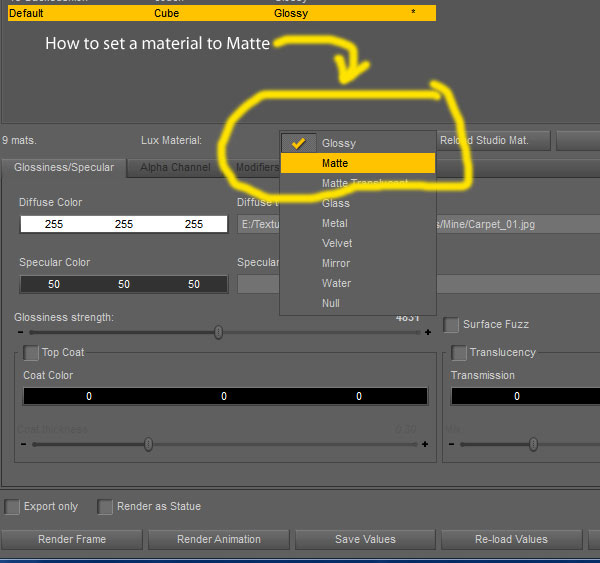 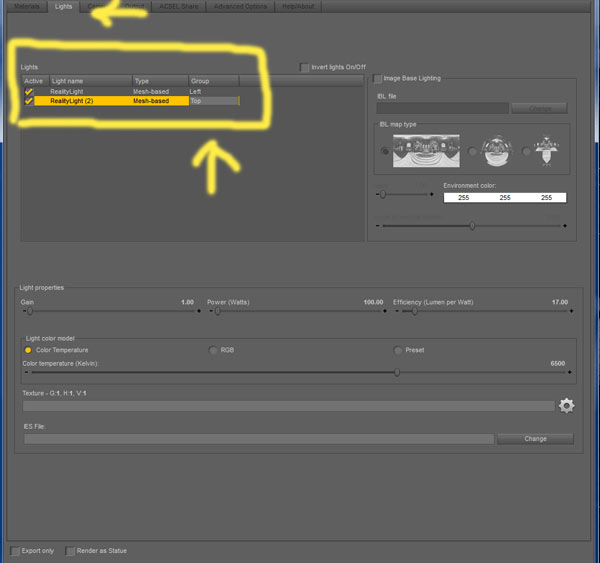 Now let's go to the main Light tab and change the group names of our lights. This allows us to change each light independentally during rendering in LuxRender. 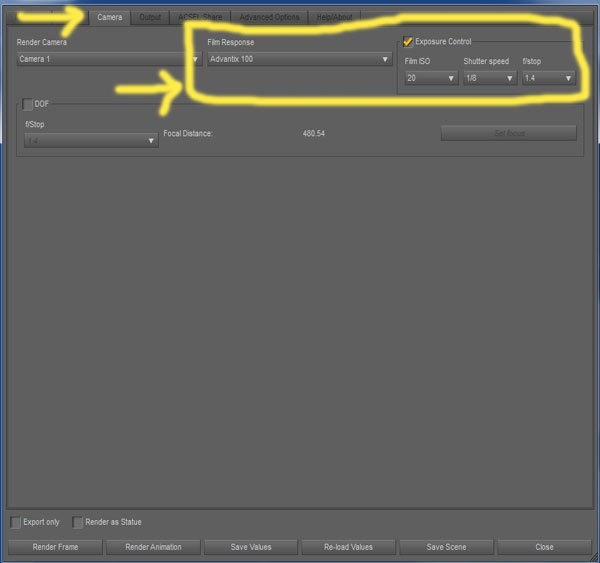 Now let's go to the Camera tab and set the initial settings that LuxRender will start with for the light levels. Like a real camera is uses these settings:

Film ISO (called "Sensitivity" in LuxRender). This is how sensitive your "film" is. In other words, how fast it reacts to the light. It is called ISO because of the International Organization for Standardization which this measuring system comes from.

Shutter speed (called "Exposure" in LuxRender). This is how long the opening of you "camera" stays open measured in fractions of a second. The longer it is open, the more light comes in, thus making your picture brighter.

f/stop: how wide the lens opens to let in light to hit the camera’s sensor (the part that receives the light and interprets it into an image). Lower numbers mean larger opening which means more light is coming in, which means, yep, you guessed it, a brighter image.

To the left of these settings, you will see Film Response. Think of this as what brand of film you will use. Each film has its own unique characteristics. I prefer Advantix 100 due to its realistic coloring in my humble opinion. Note that you can still change your film during the render, so this is not set in stone through Reality. 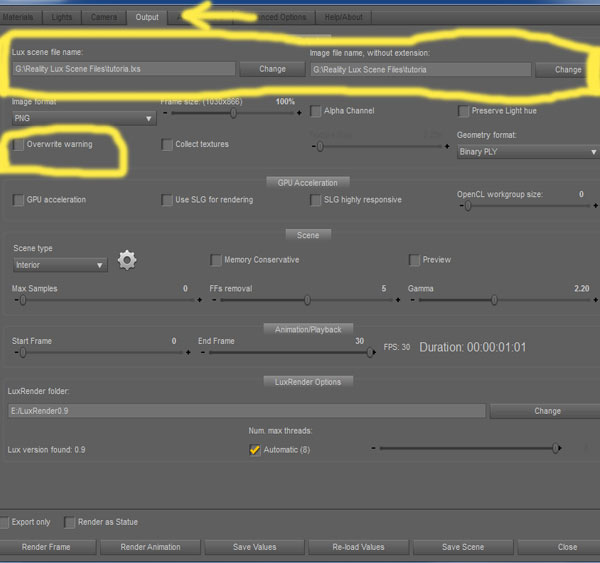 Ok, now let's go to the Output tab and set our file name for our scene and image file. I like to turn off the overwrite warning but you can leave it on if you wish. Now let's hit the Render Frame button in the bottom left to open LuxRender.

In LuxRender you can adjust your light levels as needed through the Imaging tab or through each light individually on the Light Groups tab.

You can adjust your "film" used under the Gamma + Film Response section. "Gamma" is basically contrast correction done to get the image that's being displayed on your screen to match the color values in the image itself. For more details on gamma, check out this video. 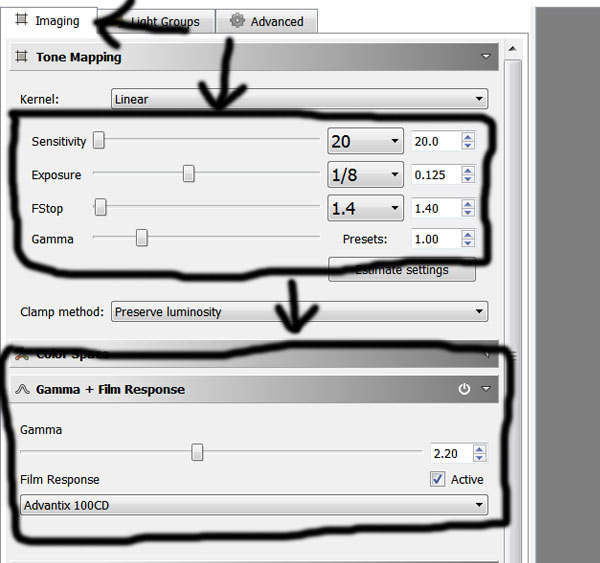 You can adjust your lights individually in the Light Group tab. "Gain" here controls the strength of the light. "Black body temperature" controls how hot or cold the light looks, and "RGB" is a way of changing the red green and blue values to change the general color of the light: 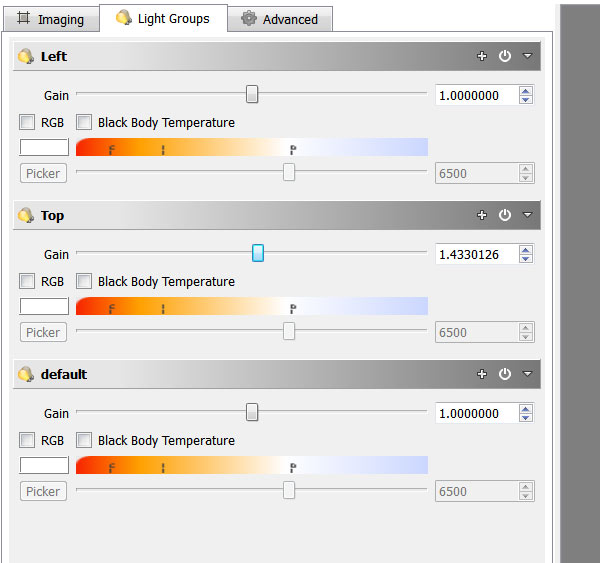 Note that the "default" light in the Light Groups tab does not actually do anything and can be considered a glitch in LuxRender at this time.

LuxRender will calculate the pixels many times. Each time it does, this is called a "sample". Depending on your image, it may take 30 samples or even 3000 to get a clear image. For a rough idea, I find 30 samples works for renders with few shiny and no transparent objects, and about 800 samples works well for a nice portrait of a person or something with a bit of glass/water, and about 3000 samples would be for a scene with a lot of glass or water with the sun reflecting off of it and many complicated objects in the scene. 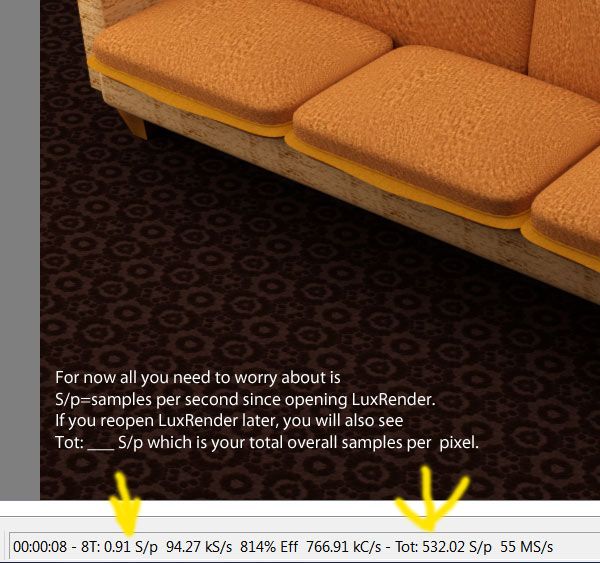 The 8T = 8 threads. A thread is like a virtual processor. I have an Intel i7 930 processor, with 4 "cores" which are essentially 4 hardware processors in one, with 2 threads (or virtual processors) each. LuxRender will use all your threads by default. The more you have, the faster your render will go.

Here is what the LuxRender Wiki says about these numbers:

So once you get the light like you want, just let it render until you are happy with it. Then you can go to File, Export to image, Tonemapped Low Dynamic Range Image to save it and close LuxRender.

Here is my end result: 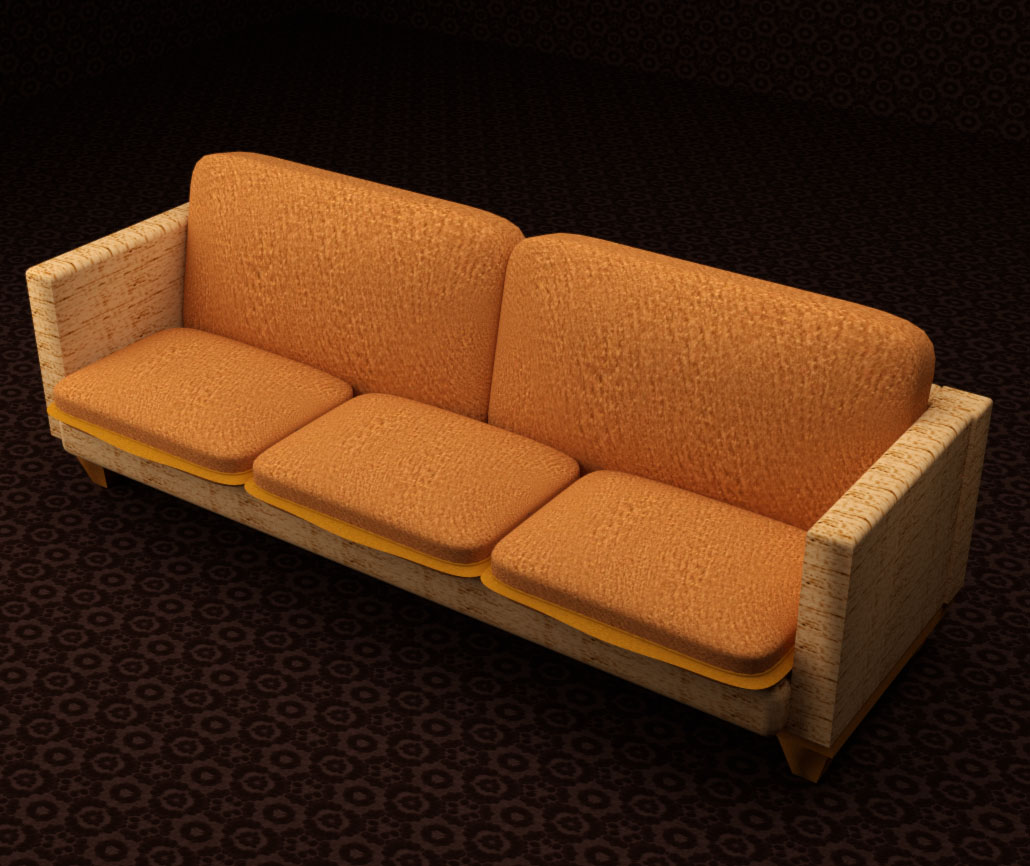 Ok, I hope this tutorial has helped you understand enough to feel more confidfent in your use of Reality and LuxRender and start making some nice renders to show everyone.